Despite Mayor Bill De Blasio’s previous statements saying that New Yorkers should expect beaches and pools to remain closed for the summer, officials have announced that they currently have no plans to close beaches amid the Coronavirus pandemic. As Long Island experienced its first wave of beautiful weather over the 1st weekend of May 2020, the shoreline filled up with beach goers. 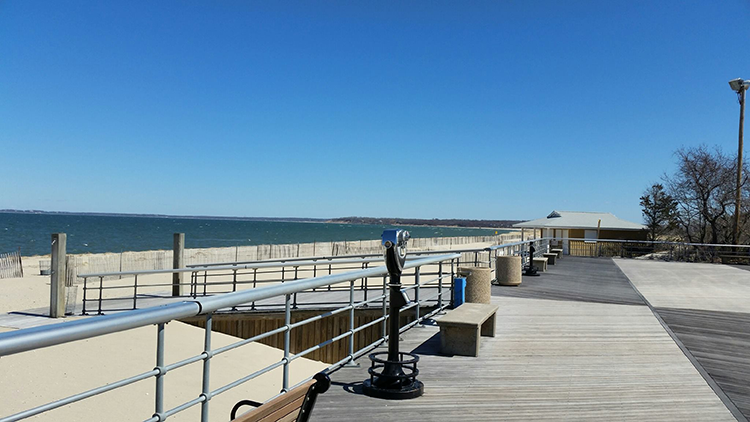 This was a cause of concern for some worried about the Social Distancing guidelines put in place to prevent the spread of Coronavirus, citing that public gatherings will lead to the spread of the disease.

Sharon Nachman, chief of pediatric infectious diseases at Stony Brook Children’s Hospital, has reported several health officials that state the risk of contracting the Coronavirus from either sitting on the sand or going in salt water is low and should not be a concern. She notes that people should take precautions when using public restrooms and waiting on long concession stand lines (if they are open).

Long Island has done an exceptional job adhering to Social Distancing Guidelines put in place thus far, so hopefully we can continue to do so to maintain beach access throughout the summer months.

The beach is a place for many people to escape from the daily rush of life and relax during the summer months. Many people attend the beach by themselves to read, write, or simply chill out.

Although large gatherings are currently prohibited, the beaches are spacious enough to have people attend while still remaining 6 feet apart. Long Island beaches are not known to be party meccas like the beaches down in Miami, so large groups are not as common. Also, there is usually enough space to keep ample distance between your group and others.

Since the beach is not a place where the spread of Coronavirus is likely, it can be considered a safe place to get out and spend some time as long as the proper precautions are taken by the people you and the people you are with. If everyone acts responsibly, we can still salvage some of the summer's greatest joys and not let them fall victim to the Coronavirus.

What Are Officials Doing To Promote Safety At Long Island Beaches?

To reduce the risk of the spread of coronavirus, beach goers have been asked to simply follow the same social distancing precautions as they would at other public locations. It is unclear if this means it is necessary to wear a mask and gloves, but we are assuming it is optional as long as you keep far enough away from others.

Signs will be posted at beaches indicating to keep extra distance between yourself and other groups of people. In addition there will be pedestrian barriers and increased shoreline patrols to ensure everyone is following precautions. Of course, if you are not feeling well you should not attend the beach for everyone's best interest.

Will Salt Shack Long Island Be Open This Summer?

The Salt Shack has emerged as a popular place to hang out with friends on a warm summer night. It is known for offering live music 7 days a week coupled with drink specials.

However, since it is technically a restaurant and bar, it will likely be closed in the beginning of the summer season, as Mayor De Blasio has not made an indication on the timetable about the status of these businesses reopening.

At this point we can only hope that the Salt Shack will open at some point during the 2020 beach season so we can visit with friends and family.

Which States Have Closed Their Beaches Due To Coronavirus?

In communities with year round beach weather, it has been a hot debate to whether closing beaches is the right thing to do. States that have had a hard time in determining the status of their beaches include California and Florida, which have seen a variation in the amount of beachgoers depending on the area of the state.

This had led to local officials in these states being the final voice in whether or not beaches remain open, which seems to be how New York will handle the situation.

After Mayor De Blasio's prior comments, New Yorkers should be thankful the state is giving them a chance to prove they can attend beaches responsibility. Beaches are a difficult place to close for the season, as the state would effectively be pulling the plug on some people's “Happy Place”.

Other states such as California have had to close beaches in certain counties due to the volume of people attending at once. Orange County California saw 1,000s of people gather on the coast over the weekend, forcing officials to close the beaches for the time being.

Some counties in Florida, such as St. Johns, have had the same issue. St. Johns county officials have reported that in Mid-March they saw crowds that nearly doubled last year's spring break and memorial day crowds. Of course, this was not helpful in containing the spread of Coronavirus in the area and the decision to not close beaches earlier was met with large pushback from local communities.