The Black Lives Matters protest began at the East Meadow Mall and continued onto Hempstead Turnpike. 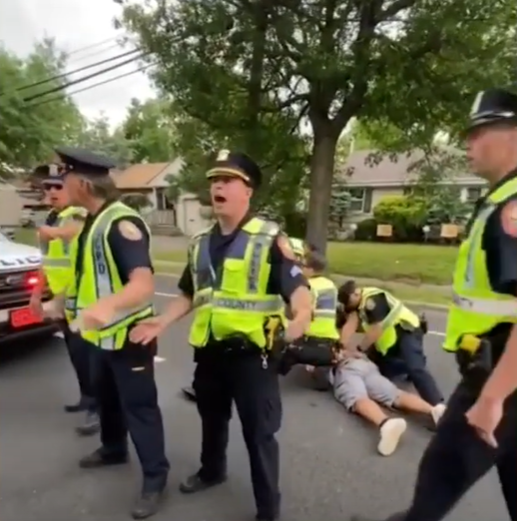 After going viral, the video gained the attention of New York State Attorney General Letitia James. The video was viewed 5 million times after being posted on Twitter during the Long Island protest. It has been aired on many news stations as well. The New York State Attorney General responded to the video by writing “Please report this and send visuals to my office” and added a link to file a complaint.

Nassau County police, while not commenting directly on the video, defended the Friday arrests.

When asked if the office was investigating any complaints regarding the video, a spokesperson for James declined to comment. The man was arrested when he began to signal for the group to walk to the left. However, he crossed through a line that police were keeping to maintain the structure of the protest. When the man approached the officers he was quickly taken under control as there was no way to tell his intentions. Based on the protest, there is no reason to think that the man was going to act violently.

After the initial video of an arrest went viral, another arrest occurred on Carman Avenue near Hempstead Turnpike. The second video depicts a protestor arguing about the prior arrest before being taken to the ground and brought into custody as well.

"It’s definitely good that it’s become viral," The videographer stated. "We definitely didn’t expect a protest in East Meadow, of all places, to blow up online." She went on to say that the police were "very cooperative and very helpful" in clearing traffic for the protesters, but that quickly changed when the protestor bumped into an officer and was arrested.

The videographer said she seemed the police department “really took it out of proportion” by making arrests at the protest.

You can view the video, which has been reposted by many here.

Police Commissioner Patrick Ryder was asked about the arrests on Saturday and stated his officers had closely coordinated on the protesters' route but said they chose to go off-course "on purpose." That, he said, "causes my officers to go flying across dividers." He said the arrest became necessary as the protest began to veer from the route of the protest and into lanes of traffic.

He added, "We gave them the lanes, we gave them the turnpike," he said, adding that as the group neared Carman Avenue "one of the individuals decided to jump into oncoming traffic" causing a car to come to a "screeching halt."

Ryder says the man in the arrest video "decided to go around the officer, bumped him a little bit." Another protester arrested, Ryder said, "pushed my lieutenant."

Department spokesman Det. Lt Richard Lebrun did not respond when he was asked if the officer's actions were appropriate and whether internal affairs were investigating.

Instead, he released this statement from Ryder “The Nassau County Police Department has provided security for thousands of people at over 80 mostly peaceful protests over the past two weeks. The department supports free speech during these protests and has the responsibility to protect the safety of all."

County Executive Laura Curran said that police have monitored over 75 demonstrations and over a total of 30,000 protestors over the past few weeks since the killing of George Floyd. She cited incidents where once an officer broke his ankle and another was punched in the face. She went on to make this statement "We are focused on the safety of the community, the safety of the protesters, the safety of our police officers and safety of anyone else in the surroundings," Curran said Saturday.