Long Island was set to host a drive-in concert at Adventure land theme park next weekend. The Band Disco Unlimited was scheduled to perform on Saturday but has had to cancel the event due to fans complaining over the price of admission on social media.

The band was charging $200 per car to attend the drive-in show, with the show producer citing that most of the money would go towards lighting and sound expenses. The band tried explaining how the price breaks down to $50 per person in a 4 person car, however, fans were quick to point out that not everyone will be attending with 3 other people. Contrary to fan's belief, Adventureland stated that a minimum of four people per car was actually required for entry and that additional guests would be able to attend for free. As a result, the event has been canceled. 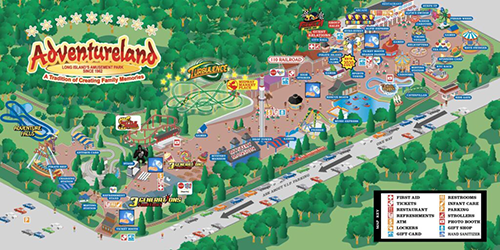 Adventureland in Farmingdale has become the first venue on Long Island to embrace the concept with its new Drive-In Concert Series.

“Since the pandemic began, we’ve been trying to do things that are outside of the box,” says Adventureland owner Steve Gentile. The concert series will complement the drive-in movie series that Adventureland is already hosting. “Drive-in concerts are new to us but we are excited to try it,” said Gentile.

“We want to give people something to look forward to instead of deciding what they can watch on Netflix again,” says producer Brian Rosenberg. He continued, “The real joy is being out with your friends and family in a safe way. This gives them a place to go.”

The $200 admission fee would offer the following, in addition to the admission of the concert:

Adventureland an Amusement Park located in Farmingdale, Long Island that has been open since 1962. They offer fun for you, your family and friends to come to enjoy a fun and exciting day on rides, attractions, games, and more.

It is located 30 minutes east of New York City, at 2245 Broad Hollow Rd. features over 30 fun and exciting rides and attractions. There is something for everyone with a variety of thrill rides, family rides, kiddie rides, and water rides.

Although the upcoming concert has been canceled, Adventure land is currently hosting an entire series of “Quarantainment”. The series features multiple drive-in movie events, which began on May 30th with a Mighty Ducks showing and continued with Cheaper by the Dozen on June 12th.

All reserved spots will include a dine-in package, movie, and bingo. Tickets must be purchased on the Adventureland website in advance of the event.

The following guidelines were put in place for the concert event. These guidelines are in effect for the upcoming drive in movie events at Adventureland as well: