About 160,000 PSEG customers on Long Island have NOT had power since Tropical Storm Isaias hit the area on Tuesday. The storm brought heavy winds with some scattered rainfall, with property damage from winds being more a prominent issue then floods.

The initial number of outages reported by PSEG was 420,000, many of which were fixed the same day. PSEG reported issues updating the power outage map, therefore its hard to tell whether the outage numbers being reported are completely accurate. Almost all of the Long Island Towns experienced a power outage at some point during the Tropical Storm Isaias, even if it was momentarily.

After the terrible response performed by LIPA about 8 years ago from Hurricane Sandy they have been replaced by PSEG. Tropical Storm Isaias has been the most damaging natural disaster to hit Long Island since Sandy. PSEG reportedly sent out emails prior to Isaias arriving that were ready and prepared. Clearly in the aftermath of Tropical Storm Isaias they were NOT PREPARED!

NY Governor Cuomo and many other New York State Law Makers feel that PSEG failed because they were hired to avoid or fix a problem that would be caused by a Hurricane or Tropical Storm. 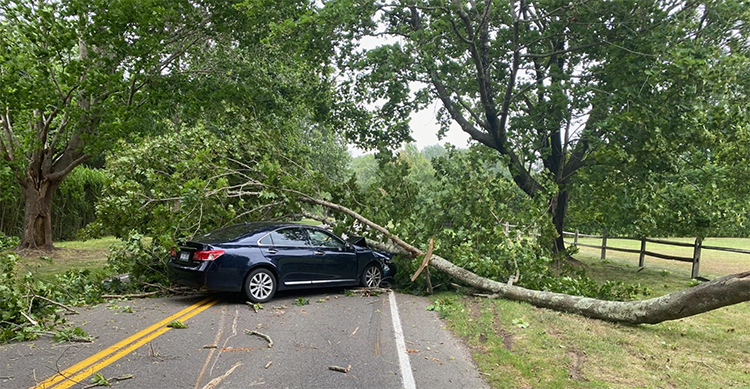 Tropical storm Isaias has made a significant short term impact on Long Island. The storm caused multiple trees to fall in addition to the loss of electricity for many. Many landscaping companies are seeing a boost in tree removal sales after the storm, as many communities are preparing for the chance of more severe weather in the future.

In addition to widespread power outages in residential areas, businesses were also affected by the storm. The LIRR had to temporarily suspend their operations and many small businesses were forced to close due to not having power. This is unfortunate timing, as many local restaurants that were already struggling from the COVID Pandemic were forced to throw out products due to their freezers not being able to run.

What To Do When Traffic Signals Are Out

Many traffic signals throughout roads on Long Island have been out of service since the storm. These are referred to as “dark traffic signals” and drivers should come to a complete stop when arriving at them. According to the NYS Department of Transportation, these dark signals are to be treated as a four-way stop sign until they are repaired. Fortunately, many of these dark signals have been quickly repaired in recent days and a majority of them should be fixed by the weekend. When driving, please be aware of these dark signals and plan a safe route accordingly.