Setauket Patriots To Hold Another Protest

Many Long Islanders were made aware of the protest that took place in recent weeks in the town of Commack after it was retweeted multiple time by President Trump. However, many people are unaware that this protest was actually organized by a local Long Island group known as the Setauket Patriots. 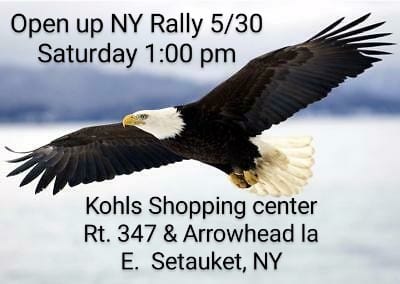 Who Are The Setauket Patriots?

This group describes themselves as a Local Conservative Group who Supports Donald J. Trump. The Setauket Patriots meets weekly on Saturdays at the NY-25A & N Country Rd from 11:00 am to 1:00 pm. The Setauket Patriots have held a series of protests which demand the local economy to be reopened immediately, as many people on Long Island are ready to get back to work.

The protest brings up a very valid question for those who own a Long Island Small Business. Business owners are now asking themselves “Shouldn't I have the right to open my business and take the chance of getting sick?”

Although the COVID-19 outbreak must be contained, many business owners are starting to speak up and feel that they deserve to be able to run their business as long as they comply with all safety and social distancing regulations.

Please Note: This news story has no political views attached, but was written simply to inform the Long Island Community of events going on in our area.

When & Where Is The Next Open Up NY Rally?

The next event is taking place this Saturday, May 30th in East Setauket.

The next Open Up NY Rally will be held at The Kohl's Shopping Center RT. 347 & Arrowhead Lane, East Setauket.

Over 300 people have already confirmed their attendance for this event!

This event is expected to be the largest protest we have seen on Long Island in recent weeks after the publicity the last one received attention from the President of the United States.

There have been 2 protests held by Setauket Patriots in Commack in recent weeks. Both protests were organized to send a message to NY Governor Cuomo to reopen New York State as soon as possible. The first protest took place on May 1st, with many protesters posted videos of the protests with hashtags #FreeNYNOW, #ReopenNY, #EveryoneisEssential.

The second protest, was held on May 15th, went viral when president Trump responded to a Tweet saying FAKE NEWS IS NOT ESSENTIAL!. It seems as if the president is in favor of opening the economy in areas where businesses are still being mandated to close.

The protest went viral when protesters directed frustrations at Kevin Vesey a local news reporter who made this statement in the aftermath; "The level of anger directed at the media from these protestors was alarming. As always, I will tell a fair and unbiased story today."

How Can I Het Involved?

If you are looking to get involved with the movement the Setauket Patriots are starting in favor of reopening Long Island, you can confirm your attendance online. You can also simply show up to the event this Saturday.

If you cannot attend this event, you can check the Setauket Partriot's Facebook Group Page https://www.facebook.com/SetauketPatriots/ to see when they are going to hold future events.

If you want to tell others about this upcoming event, share this news story to spread the word!